What Do Rising Interest Rates Mean for the Stock Market?

In general, rising interest rates tend to be a headwind for the stock market and overall economy. Yet long-term investors need not panic.

In a widely anticipated speech in Jackson Hole, Wyoming last month, Federal Reserve chairman Jerome Powell made it clear that the Fed is committed to raising interest rates until inflation is under control.

He also noted that it may take “some time” to stabilize prices and that households and businesses may feel pain in the interim. Consequently, the Dow Jones Industrial Average and S&P 500 lost more than 3% following Powell’s speech. And declines continued into the next week.

Indeed, the speech quashed investors’ hopes that the Fed may pivot its approach and take a less aggressive rate stance. Moreover, many investors are wondering what this means for stocks if interest rates remain elevated for the foreseeable future.

While a multitude of factors can affect the direction of the market, the relationship between interest rates, the economy, and the stock market is worth examining.

How Did We Get Here?

Inflation levels began to tick up in 2021, largely due to a number of pandemic-related factors. For starters, consumers have been flush with cash due to unprecedented amounts of government stimulus. This led to a surge in demand for goods and services following extended lockdown periods.

At the same time, workers maintain the upper hand in the labor market. Indeed, the Great Resignation opened the door for those who are working to demand higher wages from employers.

In June, inflation reached 9.1%—its highest level in 40 years. And despite declining to 8.5% in July, it’s still a far cry from the Fed’s target inflation level of roughly 2% over the long run.

Meanwhile, U.S. stocks experienced a brutal selloff in the first half of 2022. The reversal was largely driven by concerns over high inflation, rising interest rates, and a potential recession.

The S&P 500 officially entered bear market territory in June, falling more than 20% from its previous high. Yet investor sentiment shifted in July despite little change in the economy. Nevertheless, the S&P 500 had its strongest month since November 2020, gaining 9.1%.

Unfortunately, many experts warned that the market’s summertime gains were representative of a “textbook” bear-market rally. According to Citi Research, a bear-market rally is a bounce of at least 10% that takes place between peak and trough. Whether this is in fact the case is yet to be determined.

Consumer Sentiment and the Economy

Consumer sentiment fell to record-lows earlier this year and remains depressed year to date. According to the University of Michigan survey of consumer sentiment, U.S. consumers have rarely felt more downbeat about their personal finances, business conditions, and buying conditions.

Some argue that widespread media coverage of inflation may be contributing to the current pessimism. The chart below illustrates the difference between inflation levels and coverage today compared to the late 1970s. 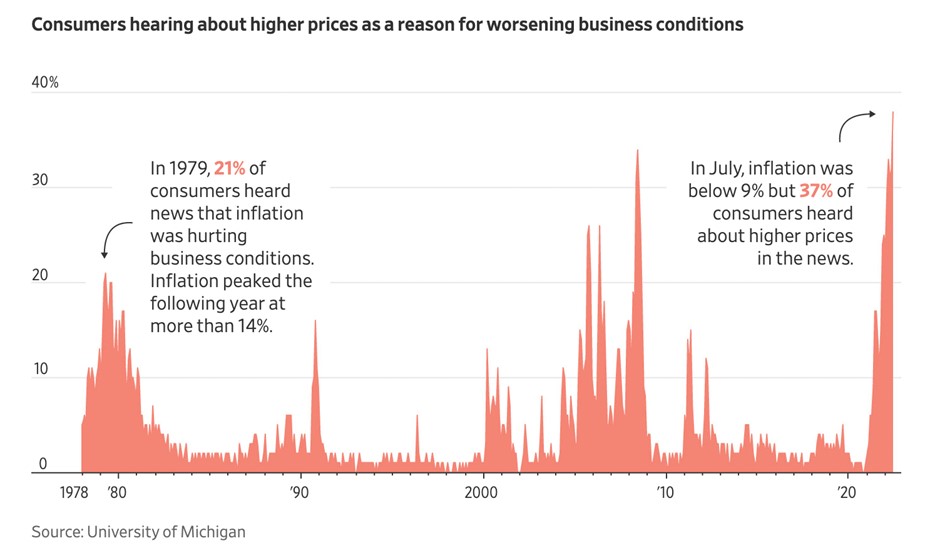 Meanwhile, consumers “signaled strong concerns that inflation will continue to erode their incomes,” according to the latest University of Michigan survey reading. And consumers are likely to spend less if they’re pessimistic about the future—no matter what the economic data suggests.

Ultimately, a negative outlook can slow economic growth considerably since consumer spending accounts for roughly 70% of GDP. The question is: will the stock market continue to tumble amidst economic uncertainty?

A multitude of factors can affect the direction of stock prices. But in general, stock prices tend to rise when interest rates are low and vice versa.

When interest rates are low—or near zero as they have been recently—there’s less incentive to hold cash because the opportunity cost is too high. In such cases, investors are typically willing to take on additional risk to earn a higher potential return on their savings. (This may help explain why the S&P 500 recorded 70 closing highs in 2021.)

On the other hand, holding cash becomes more attractive as interest rates rise. Indeed, investors can earn a reasonable rate of return on a risk-free basis, simply by keeping their cash in an interest-bearing account.

In other words, investors are more likely to sell their stocks and hold cash when rates are rising. This, in turn, causes stock prices to fall. And when interest rates rise quickly like they have in 2022, the stock market can take a beating.

How Rising Interest Rates Impact the Stock Market and Economy

While the stock market tends to react immediately to news, a change in interest rates typically takes three to six months to impact the overall economy.

For example, rising interest rates can influence employment and the pace of business growth. These consequences can further affect the direction of stock prices.

The reverse is also true. When interest rates fall, it becomes easier to borrow money. As a result, businesses spend more, growth tends to rise, and unemployment often falls. These economic improvements are likely to have a positive impact on the stock market.

Similarly, changes in interest rates usually affect consumer spending as well. As borrowing becomes more expensive, consumers have less disposable income to spend, and vice versa. This can affect business earnings, which influences the direction of the overall economy and stock market.

What Do Rising Interest Rates Mean for Long-Term Investors?

In general, rising interest rates tend to be less favorable for the economy and stock market. However, that doesn’t mean the Fed’s aggressive interest rate stance is cause for panic.

Historically, the Fed has had two goals. These include maintaining maximum employment and price stability. And while the Fed’s actions—and even their rhetoric—may negatively impact the stock market in the near-term, its primary concern is a healthy and well-functioning economy. Over time, this should lead to positive stock performance for patient investors.

On the bright side, there are opportunities for long-term investors to make money in a rising rate environment. For example, investors focused on income can expect higher coupon payments on bonds. In addition, value-oriented sectors like financials and utilities tend to perform relatively well when interest rates increase.

Ultimately, investors can likely expect continued stock market volatility as the Fed pursues its goal of reining in inflation. We understand that volatility can be painful to endure, especially over an extended period. Still, it’s important to remember that financial plans are built to withstand periods of volatility and even bear markets.

Over the long run, we believe that sticking to your long-term investment plan is the best course of action. Thus, we urge you to stay the course and focus on the things you can control.

And remember, we’re here to help. Please contact us if you need anything.